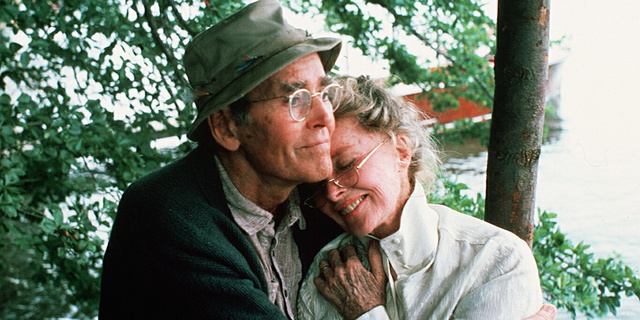 There’s little that happens in On Golden Pond that isn’t thoroughly predictable from the start, but the film is blessed with so much star power, charm and honest sentiment that everyone in the audience is willing to ignore the cliches and go the distance. In his last film, Henry Fonda plays Norman Thayer, a cranky 80-year-old retired professor, making his annual pilgrimage with his wife Katharine Hepburn (in her only teaming with Henry Fonda) to their New England summer cottage. Their solitude is interrupted when the couple’s daughter Chelsea (Jane Fonda) arrives with her fiance Bill (Dabney Coleman) and his son Doug McKeon in tow.

It takes a while, but Jane Fonda and Coleman, about to go on a vacation of their own, persuade Henry Fonda and Hepburn to take care of McKeon. Henry Fonda and the kid dislike each other from Square One, and it looks as though this summer (which may very well be Henry Fonda’s last) will be a depressing experience. Gradually, Henry Fonda and McKeon grow to love one another; their bond is strengthened during a near-fatal accident while fishing. It is through the warm relationship between Henry Fonda and the boy that the old man and his daughter Jane Fonda are at last able to display affection towards each other–the first time they’ve done so in years.

Rydell’s initial training was in music. As a youth, he wanted to be a conductor. He began his career as an actor and first became known for his role as Walt Johnson on The Edge of Night and as Jeff Baker on As the World Turns, which he played from 1956 to 1962. When he wouldn’t sign a long-term contract to remain on ATWT the producers had his character die in a car crash. He won plaudits for his role of violent Jewish mob kingpin Marty Augustine in Robert Altman‘s The Long Goodbye (1973).

He directed the TV movie The Crime of the Century (1996), which starred Isabella Rossellini and Stephen Rea. In 2006, Rydell directed the movie Even Money which starred Kim Basinger, Forest Whitaker, and Danny DeVito. Rydell was also director of the TV bio-pic James Dean (2001), which earned actor James Franco a Golden Globe award. Rydell also acted in the movie, playing Jack Warner (head of Warner Bros).

In 2009, Rydell, working with actor Martin Landau and screenwriter/playwright Lyle Kessler, produced an education seminar, The Total Picture Seminar. It is a two-day event covering the disciplines of acting, directing, and writing for film. The three have worked together as a team for many decades at The Actors Studio teaching and coaching professional actors, writers, and directors. In 2010, Rydell joined the Advisory Board of Openfilm, an online video sharing site created to help aspiring independent filmmakers.